We were sent some excellent video from a local camera crew in Colombia to illustrate that country’s winner of the 2022 World Veterinary Association’s Global Animal Welfare Awards 2022, supported by our client Ceva Animal Health.

The project was a perfect example of how to use teamwork to bring a project to the mark despite the heavy restrictions that were created by the Covid-19 pandemic. We commissioned 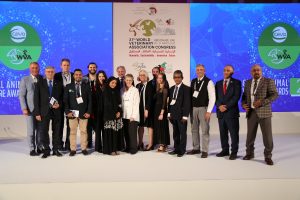 the video crew to follow Dr. Juan C. Carrascal, who was declared that Latin American winner of the Awards in 2022.

“The crew really went the extra mile during their filming,” said Good Call Media co-founder, Nik Wood, who hosted the Awards live on stage in Abu Dhabi, UAE. “We were then able to edit the material in the UK prior to the Awards and the result was a dynamic and colourful video report highlighting the amazing work of Dr. Carrascal.”

Dr Carrascal is highly recognised and respected both in Colombia and in Latin America for his work on the subject of animal health and welfare. As Animal Welfare and One Health leader and with his continuous work for several years and career he has offered science-based and academic support to develop the creation of the animal welfare framework in the city of Montería, Colombia.

He has also brought significant impact changes in the Department of Córdoba population with projects with the community giving a better quality of life both, to people, animals and the environment and in the region from the One Health and One Welfare framework.

The Global Animal Welfare Awards 2022 aimed to recognise people and institutions for their dedication and outstanding work going ‘above and beyond’ to protect and safeguard the welfare of animals and promoting the animal welfare concept and approach in their daily life.

The official award ceremony was held during the 37th World Veterinary Association Congress in Abu Dhabi, UAE to present the awards to 6 veterinarians, a veterinary student, a veterinary nurse and the University of Veterinary Medicine. During the ceremony, short videos were presented highlighting the work of each of the award recipients in their respective fields under a single common goal – improving the welfare of animals.

The WVA and Ceva Santé Animale are thrilled to continue their collaborations to underline and recognise the work done by outstanding people and institutions to advance animal welfare.