END_OF_DOCUMENT_TOKEN_TO_BE_REPLACED

Our involvement in a major ‘summit’ in Barcelona saw widespread coverage of our video material on social media outlets including Facebook, Linked In, Twitter and, of course You Tube.

We also provided the live hosting for the final day of the third Ceva poultry Vaccinology Summit at the prestigious W Hotel on Barcelona’s waterfront, before an audience of 400 vets, customers and key opinion leaders. Within minutes of the event starting, Ceva’s communications team was Tweeting JPEGs and text and our video interviews with several world leading experts that we created on the spot with our lightweight mobile edit equipment, quickly began appearing on the social media networks.

Ceva’s social media team are now used to regularly embedding videos into the Ceva Facebook site itself while also uploading to the overview You Tube channel. Using our background in business broadcast journalism we are able to record videos, edit within minutes and also write supporting text and make the whole thing live while the event is continuing in the background. 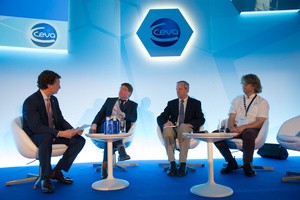 Later in the convention we were able to add another dimension when we provided the facilitator for a major live debate involving six of the key opinion leaders and Ceva personnel on the stage at the summit which involved many questions from the capacity audience.

The Summit was called against the backdrop of the fact that for over eighty years antibiotics have protected both the health of animals and humans. Protecting their future, through more targeted use has become one of the most pressing issues for Governments, Health Authorities, veterinarians and poultry producers. “Antibiotic free” poultry production brings with it many challenges and potential welfare issues. As consumers demand healthier food, can this be delivered, whilst ensuring that birds that fall sick are properly treated?

Poultry producers currently face many challenges to adjust their production systems. One of the most critical of the required changes is achieving better management of individual bird and flock health status. Since the emergence of the first very virulent respiratory diseases in poultry in the late 1950’s, the global industry has fought a constant battle to protect flocks against disease through biosecurity and vaccination programmes. 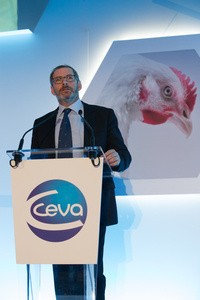 Vaccination was considered to be effective if it prevented or reduced clinical symptoms in affected flocks.  However, widespread use of new     technology vaccines such as Transmune™, Vectormune ND™ and Vectormune AI™, which are associated with improved hatchery application, provide more than just disease protection, by reducing disease occurrence and therefore the probability that birds will fall sick.

Dr Sylvain Comte said: “On farm trials and associated work from scientists and poultry producers has shown that consistent, correct application of new technology vaccines allows producers to both control and reduce disease burden for both present and future flocks. This reduces the risk of clinical or subclinical sickness and therefore the likelihood that birds will need to be treated with antibiotics.”

Ceva’s commitment to responsible antibiotic use is evidenced in programmes that focus on protection as well as reduction of disease spreading. Dr Sylvain Comte continues, “This innovative approach aims to ensure that poultry farms are healthier and less exposed to bacterial infections, fulfilling the joint needs of the consumer and the poultry producers. Ceva will continue to contribute to improved bird health status and help the industry to face the new challenges of antibiotic free production.”

The EU debate that we hosted and filmed at Agri Expo 2016 in Kent on behalf of land and property experts BTF Partnership, was a prime example of how Good Call Media really differentiates itself from its competitors.

See the video of the event by clicking here.

We were brought in by Coast Communications a leading UK public relations consultancy, acting on behalf of BTF, and asked to run a debate in the Kent County Showgrounds, during the Agri Expo event which asked the question: ‘Will farmers and landowners be better off in or out of the EU?’. Coast Communications also wanted the event filming for use on BTF’s website and social media outlets.

Our own Nik Wood went on stage to host the event and act as Master of Ceremonies and, although we expected a great deal of interest, even we weren’t prepared for the number of people who packed into the auditorium where there was standing room only.

Within minutes of the event ending, we had edited video highlights from the debate and this was made available for use on the BTF website and to other participants – a perfect case study of our ability to make live events really work and capture high quality video as part of the project. 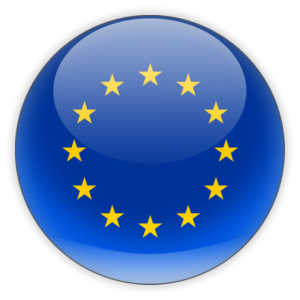 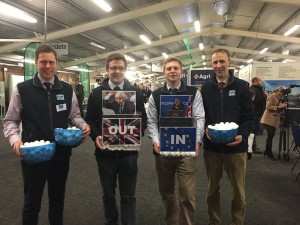 Our work for our major client, Ceva Santé Animale, saw us supporting the world wide launch of a breakthrough product in the ruminant or dairy cattle arena, Velactis® (see video report here)

Ceva Santé Animale is a global veterinary health company focused on the research, development, production and marketing of pharmaceutical products and vaccines for pets, livestock, swine and poultry and the launch of Velactis®, in Barcelona, was a major event. Good Call Media was in Barcelona to film key elements of the symposium and to interview key opinion leaders, including world class veterinary experts. 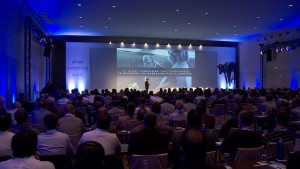 Velactis® is the first and only injectable dry-off facilitator for dairy cattle. A single injection facilitates the   abrupt dry-off procedure by allowing rapid cessation of milk production in the udder, preventing it from becoming painfully engorged and leaking milk, which can increase the risk of new intramammary infections that can lead to mastitis.

More than 350 vets from 40 countries attended the global launch.

Speaking at the launch, Lorraine Sordillo, Professor of Large Animal Clinical Sciences at Michigan State University, said: “We’ve been struggling with this issue for decades; farmers want to maximise the amount of milk they get from cows, but the problem is to get them to stop producing at dry-off. The innovation of dry-off facilitators has been needed since we started milking cows, because we know that the amount of milk being produced a dry-off is directly related to the cow’s ability to optimise milk in the next lactation as well as optimising her immune system.”