Good Call Media was selected as the preferred production company for producing the ‘kick-off’ video for the 2016 Insider Yorkshire Property Awards.

Click here to see the video that was played on the big night. 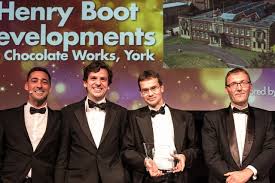 The Henry Boot team celebrates winning the Restoration and Regeneration Award for The Chocolate Works in York.

It’s the fifth year running that we have been awarded the commission to make a fast moving, engaging and colourful video for the awards. Our growing expertise in the property sector will also be recognised again shortly when we provide the video for the 2016 Yorkshire Residential Property Awards organised by Variety The Children’s Charity, which raises tens of thousands of pounds to help children in Yorkshire.

Westfield collected the coveted Development of the Year prize at the Insider Media event for The Broadway, Bradford. Held at the Royal Armouries Museum, New Dock Hall, Leeds, the event featured the presentation of 14 awards on a glittering night. Broadcaster Colin Murray was the compère, with almost 600 of the region’s top professionals gathered. 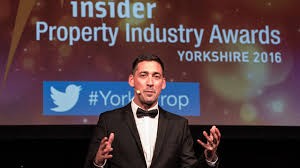 Insider’s Ian Leech praised all of the winners and shortlisted companies. “Having chaired the judging session I know that some of the categories were very close to call and I think that goes to show the quality we have here in the Yorkshire property sector,” he said.

Fiona Molloy, partner in Good Call Media, who produced the video, said:”It was fantastic to be selected yet again to make the video. Yorkshire is such a dynamic market for property, we had no problems in finding subjects to illustrate the growth and confidence in the sector.”