The 2018 World Veterinary Association (WVA) Global Welfare Awards are being staged in Barcelona, Spain, and Good Call Media will play a key role in the event following our successful partnership in 2017. 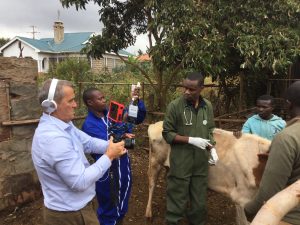 Filming in Kenya for the 2017 awards. 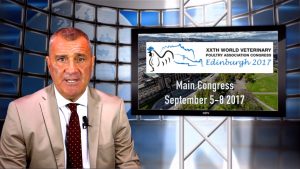 Our green screen studio can be used for any of our clients to publicise events.

We used our ‘green screen studio’ concept to record a video trailer for the ceremony, which has been used throughout social media to highlight the nominations for the Awards and details of the event itself. The news bulletin approach is a colourful and dynamic way of generating interest in an event and we have now used it successfully for a variety of different clients.

The relationship is organised through our ‘patron’ client – worldwide animal health company Ceva Santé Animale which has offices in over 40 countries. Six awards, one for each of the international regions represented by the WVA, will be handed out to vets that have gone above and beyond the call of duty when it comes to demonstrating the best of skills when it in promoting animal welfare. 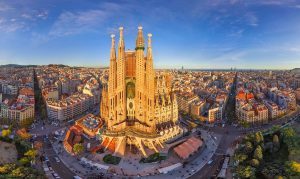 Barcelona, Spain, is the venue for the 2018 WVA Awards.

Good Call Media’s, Nik Wood, hosted the 2017 awards on stage in Incheon, South Korea. Our company also organised video reports highlighting the work of each of the winners in Colombia, the USA, Kenya, the Philippines, the UK and Egypt. The Awards will be staged as part of the World Veterinary Congress being staged in Barcelona between May 5-8, 2018. Nominations closed at the end of January and watch out for further studio-based trailers for the event in the coming months.

The Awards follow the success of the Ceva UK Welfare Awards which will also be staged again in 2018. That event will take place in Birmingham, UK, on 4 April and Good Call Media will be at the event to record interviews with the winners immediately they leave the stage. These interviews are then posted on social media within minutes of being recorded.

The speed and profile of this approach is particularly popular with the Awards sponsors as they too are interviewed and these clips, together with their company logos are included in the social media videos which they can then ‘share’ immediately after the ceremony finishes. “Because of our background working in BBC news and current affairs, we are able to turn video content around very quickly,” said Good Call Media’s Nik Wood. 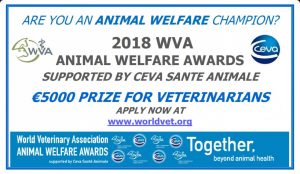 Good Call Media is celebrating its tenth anniversary year and we would like to thank all our clients, some of whom have become personal friends, for all the fantastic work they have trusted us with over the years.

What started out as the germ of an idea to set up a small business making commercial video and hosting live events has developed into a multi-national operation which works alongside major companies and worldwide organisations in a variety of different sectors. 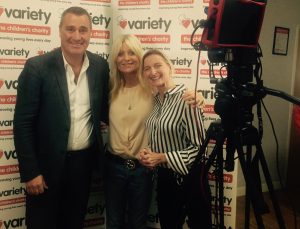 Our business was originally formed when former BBC business correspondent Nik Wood, set up Nik Wood Communications Ltd after working as marketing and communications director with several multi-national companies, latterly BNP Paribas Real Estate. Good Call Media is now co-owned by Nik and his partner, Fiona Molloy, who worked as a director and producer with a series of leading broadcast organisations including the BBC.
“I had been watching the development of online video and also the invention of a new idea called You Tube and had been writing articles in the marketing and communications trade press warning companies that a revolution was about to begin in video and what we now know as social media,” said Nik. “However I lacked the confidence to resign from a well paid City of London job and start my own operation. I remember thinking, no-one has to pay me once I start in business myself but people I respected at senior level in corporate life convinced me that I was capable of building a successful business – it was the best advice I ever had.” 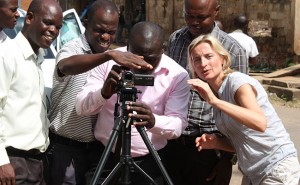 Initial contracts included work with The Brookwood Partnership. A pioneer in its time, Brookwood put fresh food back on the menu and skilled chefs back in the kitchens of many of the UK’s independent schools and the fact that they are still an excellent client of our company is a testament to the strength of that relationship. Another contract, with the UK’s Department For International Development (DFID) involved regular work in over 15 African countries and resulted the setting up of a new project called Research Into Use, which pioneered the use of video filming in the field of agriculture and livestock management.

As the business grew bigger covering many different sectors including finance, manufacturing, leisure, hospitality, technology, healthcare and communications, it became more difficult to cope with the growing demands from clients. About this time, Fiona Molloy, who had worked with Nik Wood on flagship BBC

business programmes such as ‘Working Lunch’ on BBC 2, “Business Breakfast’ on BBC 1, the Today programme on BBC Radio 4 and ‘Wake Up To Money’ on BBC Radio 5 Live joined the business to work on existing projects and also develop new business. 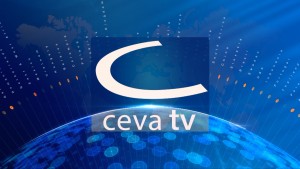 Those new clients have included Variety The Children’s Charity. We produce videos to kick off their major fund raising events such as the Yorkshire Property Awards, The Yorkshire Business Awards and also events in central London that raise hundreds of thousands of pounds for young people who face a variety of different challenges in life. Volition RX is another growing client which is quoted on the New York Stock Exchange and is developing a simple and affordable blood test to help diagnose a range of cancers at an early stage which can lead to successful treatment.

“It’s obviously great to partner with new clients but when those organisations are also helping to improve or even save lives, it makes our work even more rewarding,” said Fiona. “These companies really seem to value our heritage working in the BBC because we can tell their stories in a compelling way.”

In recent years we have started to work on a retained basis for clients such as Ceva Santé Animale the international animal health company which has offices in over 40 countries. We work all year round for Ceva and have helped to develop a world leading video platform for the business which is marketed as Ceva TV. Nik Wood also regularly appears on stage, leading professional debates, question and answer sessions and also interviewing key opinion leaders from some of the world’s most respected universities.

2017 was the most successful year yet in the history of the business.

“After such a year, it’s hard to think of further growth but demand is still increasing for what we do,” said Nik. “Our success is obviously down to hard work but we also thank those clients who have helped Good Call Media to get where it is today.”

“So a Happy New Year for all those people 2018 and if you need help or advice on developing innovative communications, don’t hesitate to give us a call!” 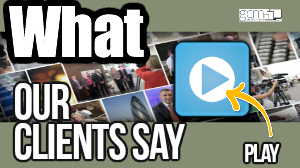 A lot can change in twenty-five years in the world of business and it certainly has for leading stairlift manufacturer Acorn Stairlifts, who celebrated their 25th anniversary at the end of 2017.  Started from humble beginnings in 1992, the global, West-Yorkshire based company is an incredible success story and has gone from producing a handful of stairlifts each year to having installed 600,000 stairlifts worldwide and being able to say that somewhere in the world an Acorn Stairlift is fitted every eight minutes. The company is dedicated to the design, manufacture, sale, installation and aftercare of stairlifts. Today they are the market leader in the US, operate in 11 countries and employ 1700 staff around the world. 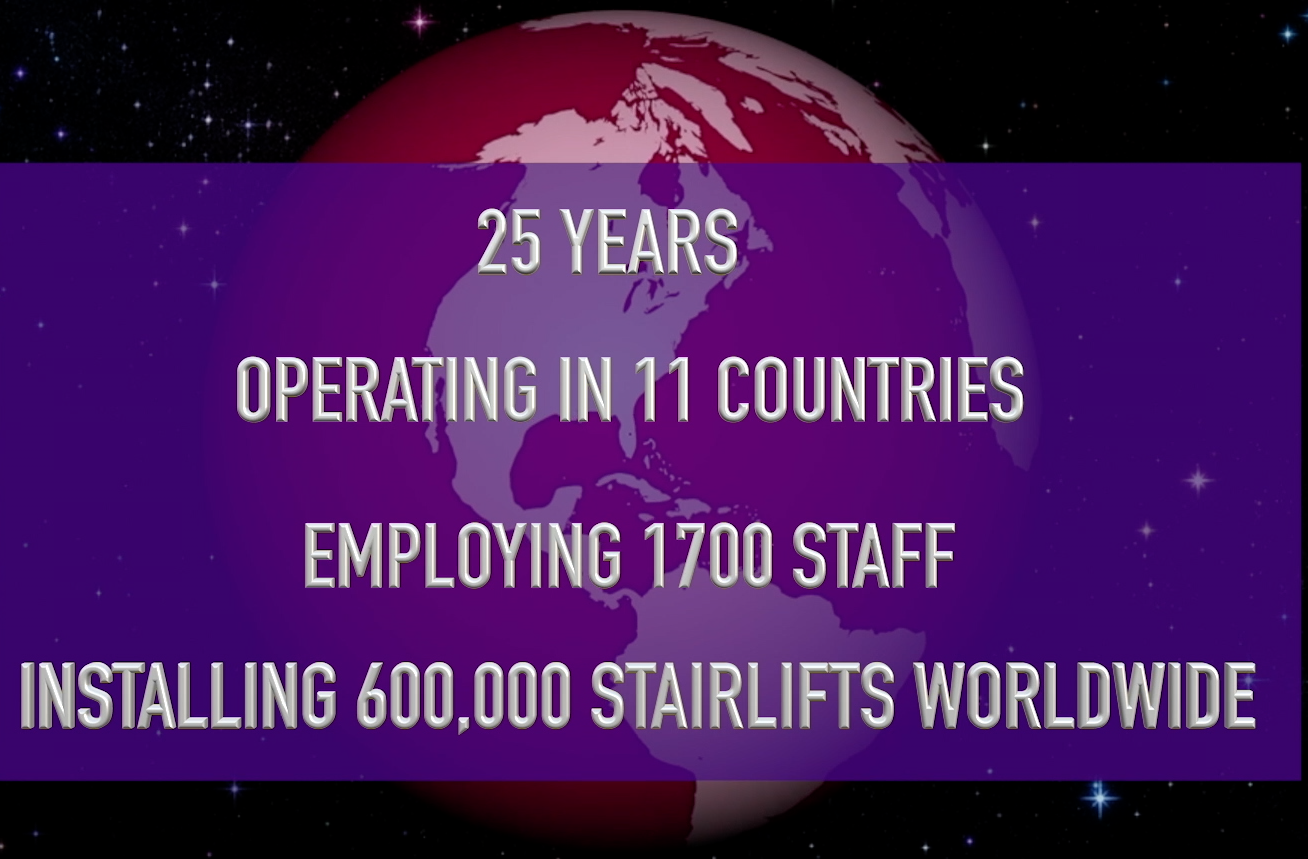 Consumed by the day to day running of the business it isn’t always easy to find the time to look back at how a company has grown but our internal ‘Acorn Stairlift’s 25th Anniversary Film’ remembering world events and noting the various Acorn milestones certainly helped staff to feel very proud of what they have achieved, celebrate the rapid growth they have created and feel buoyed about the future.