The latest in our series of videos highlighting the winners of the 2022 World Veterinary Association Global Welfare Awards, sponsored by our client, Ceva Animal Health, takes us to Copenhagen, Denmark and the work of a remarkable individual who has changed the welfare of laboratory animals for the better. 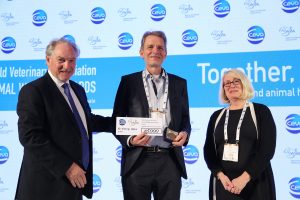 In 1997 he became a professor in laboratory animal science and welfare at the University of Copenhagen School of Veterinary Medicine. In addition to improving the organisation of the veterinary use of research animals, he built up a major teaching system, which today is probably the largest of its kind in the world.

The Awards were held during a glittering ceremony in Abu Dhabi, UAE as part of the 37th WVA Congress, held there and involving veterinarians from all around the globe. Good Call Media’s co-founder, Nik Wood, hosted the event live on stage and we were commissioned to film and edit all the videos highlighting the work of each winner in different zones of the world.

Here is the video we made highlighting Professor Hansen’s role: