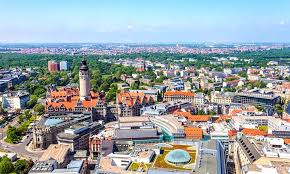 Our latest video highlighting the work of the winning veterinarians who were named by the World Veterinary Association as winners of their 2019 Global Animal Welfare Awards, takes us to Leipzig in the former East Germany.

This is the first year the WVA and Ceva have offered an award for a student veterinarian in collaboration with the IVSA.

The award winner, Aimée Lieberum, is a student at the University of Leipzig Veterinary Faculty and developed an interest in animal welfare at a young age when she carried out voluntary work and fundraising for animal shelters near her home 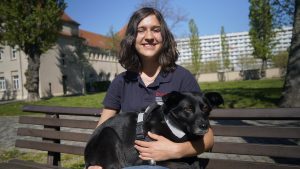 Aimée with her own pet dog outside the vet school where she is studying in Leipzig, Germany

Aimée is an active member of the BVVD, which is the German national student association and is the head of their animal welfare group, where she organises regular discussion workshops on animal welfare with her fellow students.

She also actively promoted the 2nd IVSA Animal Welfare Conference jointly with the 4th BVVD Annual Animal Welfare Seminar. She was one of the main coordinators and organised the conference with the help of a small team of veterinary students. The conference was attended by 120 students; national and international.

Speaking about her award, she said: “It’s sometimes quite hard to be taken seriously as students so I thinkthis award is very important because it shows that vets really do acknowledge what I do and what we do as students on the subject of animal welfare and I really think this will make a difference in the future.”

Our filming for the Awards took Good Call Media to five continents in just two months and we also helped to host the Awards, held at the WVA’s 35th Annual Congress in San Jose, Costa Rica.

Filming For Insider
Scroll to top