Good Call Media met a footballing legend for our latest assignment for Variety the Children’s Charity.

We can’t say too much about the reason for interviewing the former Arsenal and Scotland goalkeeper who went on to a successful TV career as a presenter and pundit but all will be revealed shortly. 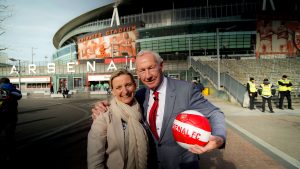 We caught up with Bob outside the famous home of Arsenal in North London and he couldn’t have been more helpful with our project.

As a player, Wilson is most noted for his 11-year playing career at Arsenal where he made over 300 appearances. Wilson as well featured as a youth and senior international for Scotland. After retiring as a player, he turned to coaching and broadcasting, presenting football programmes on television for 28 years until 2002. Wilson has also gone on to create a charity

organization known as the Willow Foundation.

Our work with Variety now spans the UK. We are currently working on the Yorkshire Property Awards, a video that helps to kick off the prestigious black tie event which attracts over 1000 people from the region’s
property industry at a glittering event held in Harrogate’s Rudding Park Hotel & Spa.

Our work with Bob Wilson is connected with the London office of Variety and their own property lunch which will be held later this year.

Watch this space for further details on how Bob Wilson has helped our project.