Our latest project has taken us to the beautiful city of Budapest, Hungary,  where we have carried out an assignment for one of our biggest clients.

The location was Ceva Phylaxia, a major campus for Ceva Sante Animale and the programme involved a series of interviews with people taking part in the ‘We Share’ programme which has been rolled out in many of Ceva’s worldwide networks.

Over 4000 Ceva personnel took part in the company’s biggest global engagement and satisfaction survey in
2017 and this has been followed up in 80% of Ceva’s offices by workshops under the ‘We Share’ banner to determine actions and activities that will take place as a result. 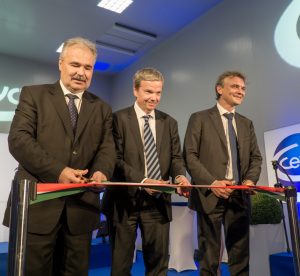 The official opening of the new facility

Good Call Media’s team, together with Ceva’s Group Communications Director, Martin Mitchell, travelled to the HQ of Ceva Phylaxia in Budapest to film a series of interviews with people who have taken part in the ‘We Share’ workshops and also to record case study accounts of people who have been developed within Ceva.

The interviews will be used to further improve the employee engagement programme and will be repeated in other offices as and when we visit.

The origins of Ceva Phylaxia go back as far as 1912, when János Köves established Phylaxia Vaccine Production Co. His aim was to develop and produce a serum to protect the numerous swine population of the region against a severe outbreak of swine fever. This was the beginning of a tradition of prominent research, bringing solutions to livestock producers to help them in their fight against major diseases.

Famous Hungarian scientists such as József Marek, Aladár Aujeszky, Domokos Derzsy and Adorján Bartha, names that are familiar to veterinarians worldwide, have been closely associated with the development of the company.

Ever since, the company’s work has been closely and intimately tied up with biological research and development.

Our Video Trailers For Events – Growing In Popularity
Scroll to top