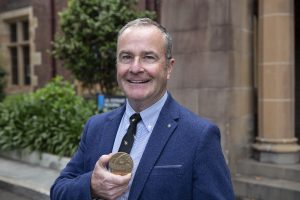 Congratulations to Professor Paul McGreevy who is the Australian winner of a 2020 World Veterinary Association Animal Welfare Award, supported by our clients, Ceva Animal Health.

We filmed Paul at his beautiful Hunter Valley home in New South Wales, Australia, for this year’s awards. The filming was completed before the Covid-19 lockdowns were introduced and this Autumn we put together a dynamic online awards ceremony which highlighted all the winners of the 2020 Awards.

Paul is one of Australia’s leading veterinarians and advises many different groups including the Royal Society for the Prevention of Cruelty to Animals (Australia). He has been working with the group on the use of the whip in Australian horse racing. Horses are close to Paul’s heart and during our visit to the Hunter Valley we were able to film him with several of his own horses and use our drone camera to capture him on horseback in his own dressage arena which is on his homestead plot.

Here’s the film we made in Australia: